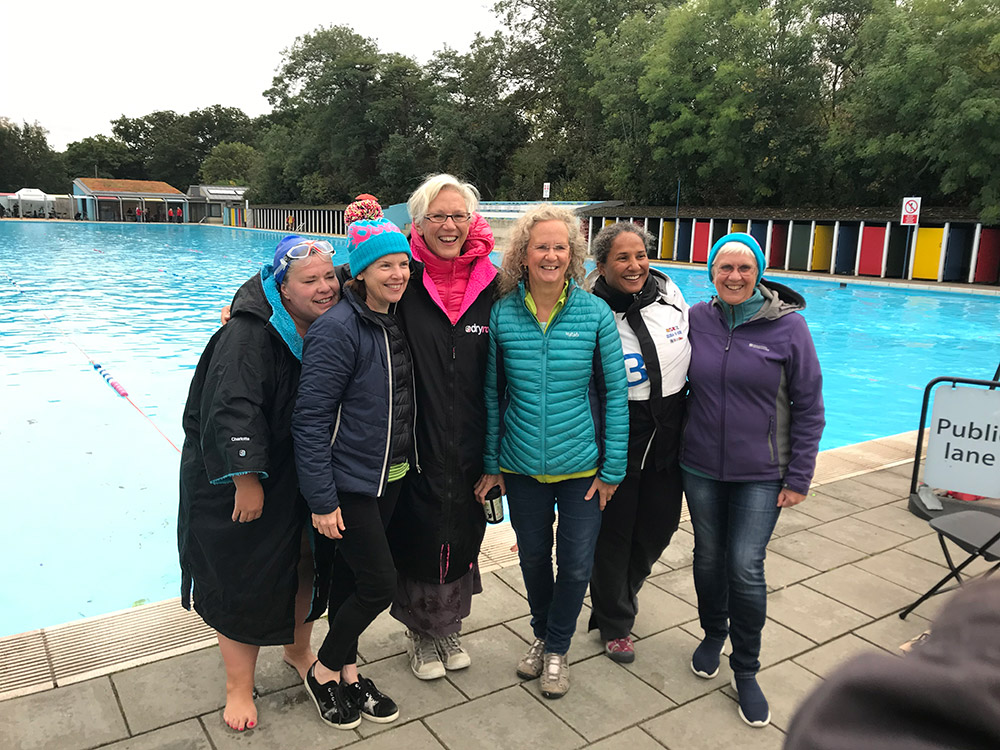 How an all-women swimming crew faced the ‘villains and heroes’ of the English Channel, in the middle of the COVID-19 pandemic, for the crossing of a lifetime.

“Take a seasickness pill, before we leave,” they said. Not I, I was raised on an island and was as comfortable on a boat as I am on the land. I thought to myself, “no way, I do not need seasickness pills.” In as little as two hours, I would be regretting that internal statement, as I hung my head over the side of the boat after my first hour of swimming in the Channel.

Everyone hears about Channel relays, the pulling together of a team of disparate swimmers, all with one goal in mind: Getting across the English Channel, hitting the Cap and to have one team member successfully stand on Wissant Beach.

There have been Channel Relays, which support charities (Aspire is the most common), and ones which have a particular theme (two years ago, a team of amputees got across the channel). Our theme was that we were a bunch of women, with a variety of swimming skills, with a total age of 344 years. We were a rag-tag group, who loved wild swimming.

We called ourselves the ‘South London Allsorts’, after the English sweets, because we were all sorts of women, old/young, thin/plumpy, tall/short, fast/slow, in various skin colours. We were just average swimmers; what we shared fiercely was a fighting spirit to get across the channel and to tell the story.

The relay starts in the dead of night. Not the best and most endearing part of the swim, for those of us who are morning persons. Yet the night owls were at their best. The adrenaline wave keeps you buoyant for some time, as there is plenty to do – stowing your kit, finalising and updating the observer, and getting to know the boat/crew.

Once we headed out, it was an hour’s boat ride to the starting point.

Sue, our fearless captain was the first in the water – starting our adventure just after midnight. Yes, we had trained to swim in the dark, but were unfamiliar with swimming next to a boat, while the rest of the world was in darkness. Our lovely boat, the SUVA was fitted with an almost unholy bright light – a beacon in the darkness as well as guiding light. Each relay member swam for one hour. So, depending on the speed of the team, we could easily do 2, 3 or even 4 swims before hitting French soil.

Back to the first villain, seasickness. I was in next.  Did my swim – really enjoyed it and once my hour was up, I got back on the boat. Because the boat travels at the speed of the swimmer, every wave, push and rocking was magnified and the forward momentum did not cancel out the side to side rocking.

Now, I know boats and knew what was needed to avoid seasickness. Just watch the horizon, it will settle you. But because we had left in the middle of the night, the horizon was dark. So, no horizon to watch. But as they say, ‘pride cometh before a fall,’ I learned my lesson. I fed the fish had a quick nap and was back to fighting (swimming) fitness. 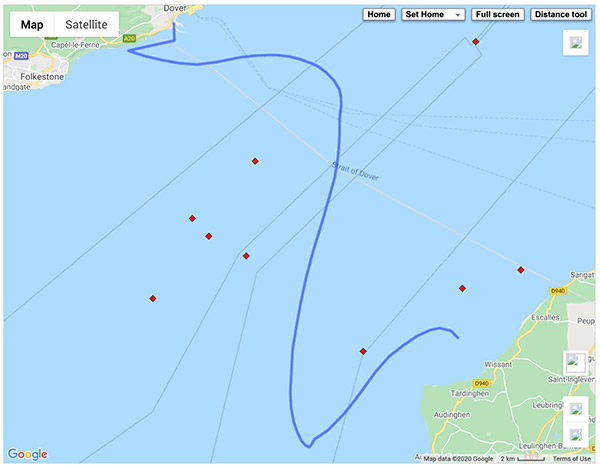 Seasickness was the first villain and the next one up was the swarm of jellyfish in the ‘Separation Zone’. I had experienced jellies during my swim adventures, mostly moon jellies. Relatively harmless, but they travel in such a bloom it’s akin to swimming through a bucket of snot. Despite all the training and hearing the stories though, we were unprepared for the variety and amount of jellies hanging out in the Separation Zone.

And what is the Separation Zone? Well, the English Channel is wide enough to dictate on which side large, massive, ginormous, ships travel up and down the Channel. There is a stretch of water in the middle where large ships are not allowed to travel to avoid collision. This is the Separation Zone. Filled with jellies and other sea beings, including a group of women in mid-July, heading towards the other side.

There were all types of jellies which dance around in the Separation Zone. Such a vast variety of colours and sizes. Just to be clear the jellies hoods are not the villains of this story, but rather their tentacles. These are nearly transparent and can be metres long. But if you are hit with one – Dear Reader, I was across the face – then no small amount of swearing can be used to help fend off the stings. On the upside, the saltwater does help to neutralise some of the more vicious stings.

Our crew and captain of SUVA as well as the observer were old hands at getting swimmers across the channel. They were the support network that every hero needs. They keep us focused, help identify risks and give buoyancy to our courage. We were extremely lucky to have such an amazing support group – as the villains were trying to keep us from our goal. The first two villains seemed tame when faced with the last, grand villain.

Indeed, the last and most ferocious of the villains required the skill and capabilities of two epic captains, two boats, a rib, and nerves of steel.

Most swimmers and relays, if they can get the tide right, aim of the Cap (Cap Gris Nez), which is the shortest distance from the south coast of England to French soil. If, like our relay, have swimmers of various abilities, then the beach at Wissant is the next best goal. But, for the past couple years a sandbar has been building just outside the bay at Wissant, making landing on the beach that much more treacherous.

Yes, Dear Reader, that is the last and most savage of the villains. We baptised this villain ‘Gary Oldman,’ as he is one of the top 10 movie villains and so very fitting that such a terror should have an appropriate name.

Gary challenged us beyond what we thought was possible. A swim that should have taken 40 min to complete, required 4 hours. Gary played with the flow of the tide and the eddies in the bay, making it uber challenging for the swimmer. Thank you, Gary… you have earned your place as an epic villain. One that many a future boat captain and swimmer will need to heed as it lurks just shy of the goal.

…And Heroes: ‘The Allsorts’ 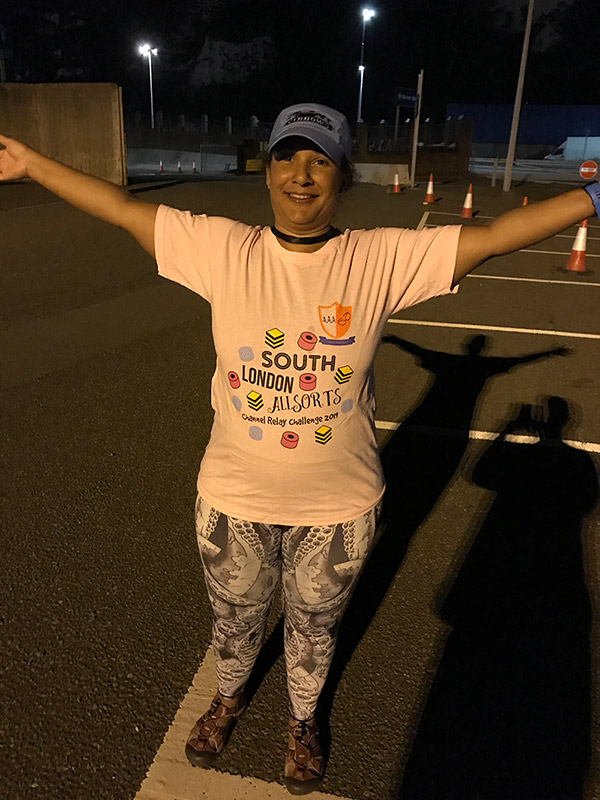 To balance the universe; for every villain there is a bevy of heroes. The Allsorts bevy that fought and succeeded against these villains were the Allsorts on the day. So, that in just over 18 hours, our tough and tenacious relay team made it to the other side. Sue, our indefatigable captain, started and ended our journey. From late-night start to nail-biting finish, we were up to the challenge and ended on a high note.

There were many villains, from seasickness, to fanciful jellies to a sandbar which showed elements of true cruelty. But despite these tests to our spirit, we overcame them and now they are stories to be shared, with a chuckle and a sigh.

The Allsorts are the heroes of this story – despite how overwhelming the villains seemed; we overcame them. We are normal swimmers, a group of ladies, who enjoy not only the swim but the adventure that goes along with wild swimming.

We trained in lidos, rivers, seas, lakes and lochs – with a singular focus of swimming and finishing and English Channel. Yet, what put us over the edge and nudged us into completing the swim, was teamwork, mutual support, jelly-babies, good training and the single-mindedness to finish what we started. 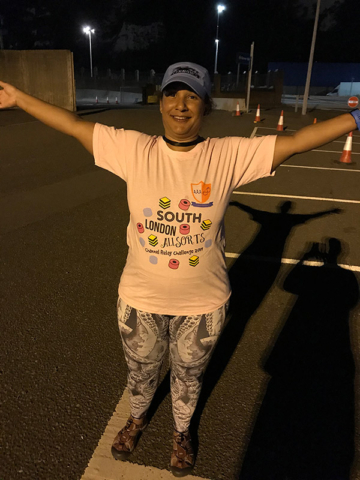 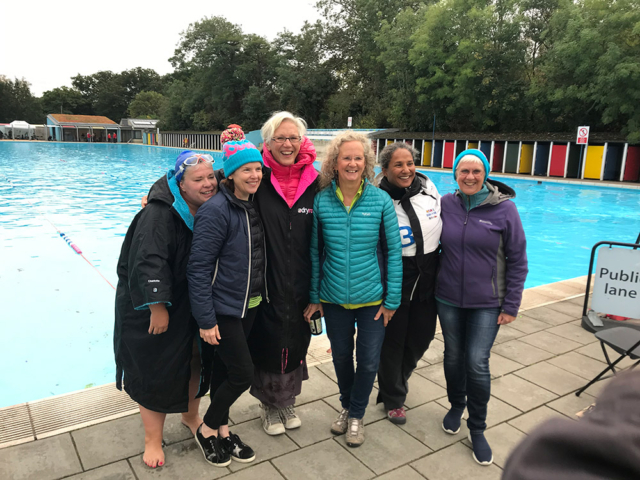