“Mark once had a fear of open water after a friend nearly drowned and his mother did not swim. Mark overcame his fear of water and swimming in open water to compete in more than 450 open water swim triathlons and relay English channel swims. Mark has now swum in most of the world’s oceans and coaches swimmers of all ages & abilities to overcome their fears and help them swim in open water.”

Mark Kleanthous is a legend in Triathlon training. He has completed more than 40 Ironman distance triathlons in a 35-year career, and is the author of two bestselling books: “The Complete Book of Triathlon Training” and Triathlon: The Mental Battle”.During Mark’s running & triathlon career he has crossed the finish line in more than 1,100 events including 71 marathons all under 3 hours & more than 500 Triathlons.

In the last 35 years, Mark has covered more than 7,500 miles swimming 189,000 miles cycling and run more than 56,500 miles training and racing or more than 9 times the distance around the world or the distance to the moon.

Based in England, Mark is of Greek and Italian heritage. He now coaches full time all age groups from 17 to 81-year old and has a successful web site called http://www.ironmatecoaching.co.uk/. He has written more than 800,000 words about how to compete in a triathlon on his information website www.ironmate.co.uk. This contains everything about Swim Bike Run Triathlon, Iron Man, Nutrition, Injury prevention and Time saving tips. It is free to sign up and receive free regular newsletters on the best ways to train & helpful tips. 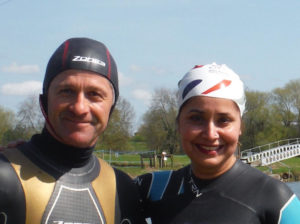 NB.: Mark is coaching Malini in her bid to complete her first Ironman Triathlon in October in 2017, as part of the TAGS campaign.