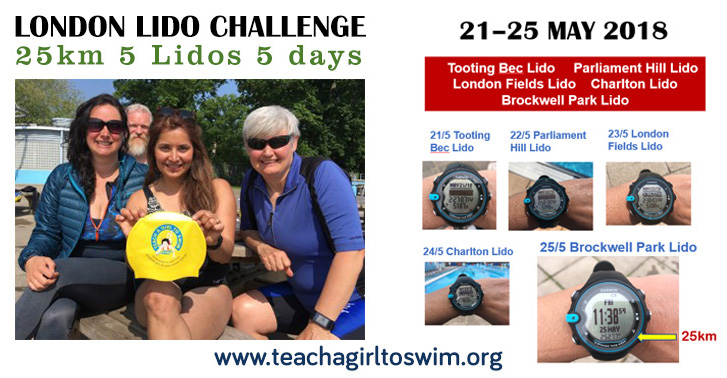 In the week of Monday 21 May 2018, Malini swam 25km over 5 days in her 5 favourite Lidos (open air swimming pools) in London as part of the TEACH A GIRL TO SWIM campaign. Lidos are a uniquely British institution and mark a golden era in the country’s fascination with outdoor swimming. The majority of lidos were built in the interwar years of the 1930s as recreational facilities by local councils. Of the 169 lidos built, not all have survived.

It is a little-known fact that London has a unique abundance of extraordinary lidos. Probably more than any other city in the world. London’s Lidos deserve greater recognition and respect as important aquatic and architectural assets of this great world city. They should be seen as a core part of London’s ‘blue assets’ to complement the ‘green’ reputation the city enjoys due to its abundance of green space and ambition to be the world’s first National Park City.

Malini devised the London Lido Challenge to celebrate the history of these lidos and their continuing role in their communities. Frequently threatened by demolition and development, their staying power is due to the tenacity of generations of local swimmers who have campaigned to ensure their existence. Her Lido swims sought to attract support for the TAGS campaign from the large community of swimming enthusiasts in London and are being accompanied by outreach and awareness-raising with schools, community organisations, swim associations, policymakers, parliamentarians and others. 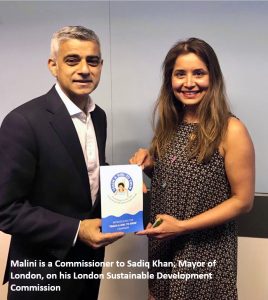 One in three Londoners is foreign born. This diversity is not always apparent in London’s pools and waters. A key focus of Malini’s outreach is to engage with London’s large diaspora communities and empower girls and women to swim with confidence. In particular (but not limited to), those from South Asia, such as herself who can often lack role models and face cultural barriers to taking up swimming and develop body confidence.

As an Indian woman and an immigrant, Malini learnt to swim aged 9 thanks to mandatory swimming lessons in her primary school in Potters Bar, England. She has not looked back since and is swimming more than ever now in her sixth decade. Her daughters have similarly benefitted from school swimming lessons in London and all the family are keen swimmers.

Compulsory swimming lessons and water safety through the national curricula in all countries is a core policy ask of the TAGS campaign, building important life skills and contributing to general health and well-being. In an age of climate change and increased flooding risk, swim & water safety can also be regarded as essential survival skills for many communities around the world.

The TAGS Campaign is keen to promote this message and Malini and our Ambassadors can be contacted for talks in your school/ organisation/ institution: contact@teachagirltoswim.org

Malini swam 25km (5km each day) in five days in the following five London Lidos in May.

Photos from her swim are available on the TAGS Photo Gallery: 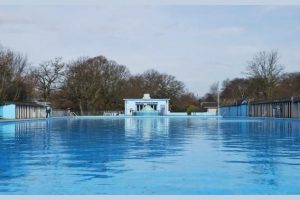 Tooting Bec is the mother of all Lidos and a great starting point for the London Lido Challenge. A vast capacious cold water pool open year round. At 91 by 33 metres it is the largest Lido in the UK and Europe. It is home to the South London Swimming Club and open to the public from May to September. Originally built in 1906 as the Tooting Bathing Lake in the middle of Tooting Common, it was upgraded Art Deco-style in the 1930s, the heyday of Lido building in the UK. Women were originally only allowed once a week. Fortunately, much has changed this since and women and girls are no longer 2nd class Lido users. 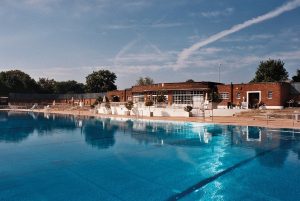 Parliament Hill is a classic Art Deco-style Lido built in 1938, with a stunning stainless steel bottom. Situated north of the river in Hampstead Heath, London’s large ancient park, the lido enjoys an expanse of open sky and some of the cleanest air in London. At 61m (200 feet), it is smaller than Tootling Bec Lido but similarly a cold water pool and also open year round. 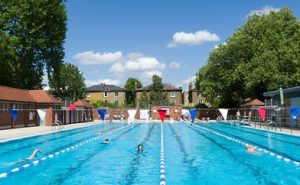 London Fields Lido in Hackney is another lido north of the river. Originally built in 1932, this 50m pool faced demolition in the late-80s and was only rescued by community resistance. Restored in 2006, the lido has re-opened recently following a major facelift. It offers one of the few all-year round heated pools in the city and served as a training ground for the 2012 Olympic swimmers. 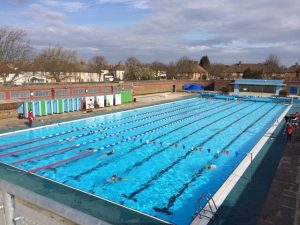 Charlton Lido is based in south-east London and is another 50m, heated pool. Opened late in the lido-building decade of the 1930s, it was originally a standard cold water pool but recent refurbishments have upgraded all the facilities and include a children’s pool and café. 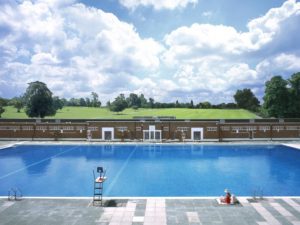 Brockwell Park Lido is a 50m cold water pool in south London. Located inside the perimeter of Brockwell Park, it is a Grade II-listed stylish lido built in 1937 by the same architects behind Parliament Hill Lido. It features all the key architectural tags of Art Deco lidos, including low-slung buildings, clock and classic signage. Affectionately called ‘Brixton Beach’, it is a magnet for visitors on hot days and also home to Windrush Triathlon and cold water swimming groups.

Acknowledgements: Grateful thanks to Cecilia and South London Swimming Club for their support, and to Jenny Landreth for her book, Swimming London, which both informs and enthuses (and from which we have borrowed liberally here). Recommended reading for anyone passionate about swimming and lidos.