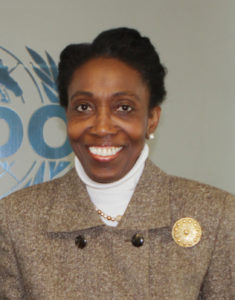 “I am impressed by this campaign and wish it every success. That it is practical and brings together at least 3 of the SDGs portends well for its relevance and success… Many years ago I suffered a near-drowning accident. It was extremely traumatic. Had I not known how to swim and have faith and confidence, I would surely have drowned. Every girl must know how to swim!”

Ambassador Dessima Williams is the Former Special Adviser on the Implementation of the Sustainable Development Goals (SDGs) to the President of the United Nations General Assembly, as well as the Former Ambassador of Grenada. While she was Ambassador to Grenada, she simultaneously served as Chair of the Alliance of Small Island Developing States where she led a 40-island global climate change effort that worked to keep the rise of average global temperatures to 1.5 degrees in the Copenhagen Accord of 2009, which can be found in the 2015 Paris Agreement. She also participated in the Rio+20 conference and two of the UN SIDS conferences.

In addition, Ambassador Williams has served as Grenada’s representative to the Organization of American States, Deputy Governor to the World Bank and Deputy Permanent Representative to the Inter-American Commission of Women. At the Organization of American States she was involved with the Caribbean as a Zone of Peace, Development and Independence and promotion of small island states. Ambassador Williams has also been a professor, advocate for rights of women and girls, and founded the Grenada Education and Development Programme.